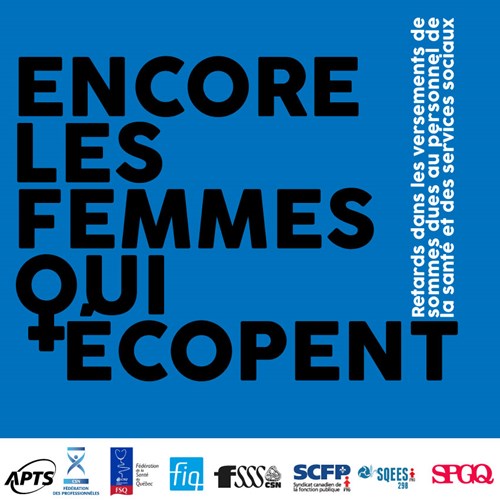 Eighty percent of the employees expecting the payments are women. The government owes $1.28 billion under recently signed collective agreements, plus another $1.15 billion for some job titles under agreements to settle pay equity complaints from 2010 and 2015.

A level of confusion that no one could justify

Under strong pressure from labour organizations since November 2021 to accelerate the payments, health and social services minister Christian Dubé said he was committed to them being made no later than March 1, 2022. He has now postponed this deadline without even notifying employees affected by the decision or labour organizations. On February 11, MSSS representatives presented a new timeline. Incomplete and vague, extending in some cases to March 23, it indicates that payments might take the form of advances. Unions are worried their members may receive erroneous amounts which they will then be required to reimburse.

Minister Dubé has said on several occasions that he would take full responsibility for the delays. However, we learned from the deputy minister that no interest will be paid on the amounts owed to our members. That is truly adding insult to injury.

As for payment of amounts related to pay equity settlements, no specific date has been put forward, but the word is that nothing will happen before April.

“We fail to understand how women in Québec can still be waiting, in 2022, for equal pay in relation to men,” say the spokespersons of health and social services unions. “Those complaints were filed in 2010 and 2015. This is simply unacceptable and revolting, not only for the women to whom this money is owed, but for all women in Québec.”

Minister Dubé has said he’s embarrassed by the inefficiency of the various systems used by his ministry, and health and social service institutions, to pay the amounts owed to our members. He must nonetheless be held accountable for delays in meeting deadlines that have been known for months. He was also slow to issue a directive that would have made these payments a priority. In addition, given the context, we are left speechless by explanations regarding the obsolescence of IT systems. What is being acknowledged is that government employees are now called on to make up for the incompetence of external payroll management suppliers – Médisolution and Logibec – and for the ministry’s inertia. The unions believe that the government should bring these operations back into the public service where they can be carried out by skilled and qualified personnel. That would reduce outsourcing in the health and social services system and ensure better monitoring.

A government that can’t be trusted

The morale of employees on the ground is being affected by these multiple reschedulings. Their ability to trust Mr. Dubé’s word, and indeed to trust the Legault government, is also being undermined.

“These are significant amounts, and our members are entitled to them,” say the union spokespersons. “For two years, health and social services workers have been using every last ounce of their strength to hold the system together. They’ve made sacrifices, both personal and professional, over and over again. Staying motivated is more and more difficult, and these delayed payments are leading to even greater loss of motivation. We’re coming up to March 8 – International Women’s Rights Day. As that date approaches, we’re asking the government to pay our members, most of whom are women, the amounts negotiated in work contracts and agreements on pay equity.”