Our union brings together expertise that is both extensive and varied. APTS members, 86% of whom are women, hold over one hundred different job titles in five different sectors: diagnostic services (laboratories and medical imaging), rehabilitation, nutrition, psychosocial services, prevention and clinical support. They work in facilities serving a variety of missions, such as hospitals, youth centres, rehabilitation centres, residential care centres, specialized institutes, and CLSCs.

What is the APTS mission?

The union’s priority mission is to study, safeguard, defend and develop the economic, social, moral, educational and professional interests of its members. In the same spirit, it is dedicated to negotiating collective agreements and ensuring their application.

Solidarity, democracy, equality, social justice, freedom and co-operation are the fundamental values inspiring the APTS in carrying out its mission and in all its actions.

First and foremost, the APTS defends the right to collective bargaining, freedom of union action, and the right to unionize. It also defends women’s rights and the right of every person to work in a healthy environment and to be treated with respect and dignity. And it asserts the right of all people to decent working and living conditions.

What are APTS values?

Solidarity, democracy, equality, social justice, freedom and co-operation are the fundamental values inspiring the APTS in carrying out its mission and in all its actions.

First and foremost, the APTS defends the right to collective bargaining, freedom of union action, and the right to unionize. It also defends women’s rights and the right of every person to work in a healthy environment and to be treated with respect and dignity. And it asserts the right of all people to decent working and living conditions.

What are the cornerstones of APTS union practices?

The APTS derives its strength from the commitment, support and mobilization of its members, which are essential to its development. Its practices as a union reflect its members’ needs and values. It is committed to ensuring the vitality of union life at the local level, and it makes union education a priority. It works to raise awareness among its members and influence policy-makers through a variety of socio-political actions.

Given its members’ wide variety of professional practices, the APTS is in a unique position to grasp the many different realities characterizing the health and social services system, and is committed to promoting and defending universal, high-quality public services that are accessible to all. 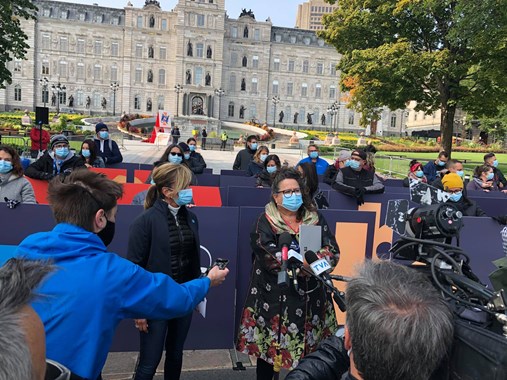 The APTS defends public services because they offer the best way of meeting Quebecers’ needs, and promotes preventive approaches as one of the best ways of improving their health.

The APTS follows the principles of sustainable development, advocating environmental protection and ethical consumerism in its day-to-day practices.The union combats all forms of discrimination and violence, whether directed at its members or instigated by them.

The APTS regularly works in solidarity with other groups to defend common causes, while remaining completely independent in relation to the government and all political parties.

When was the APTS founded, and how did it evolve?

The APTS was founded in March 2004 in the wake of a law adopted in December 2003 – Bill 30 – that restructured bargaining units in the health and social services system. It is the product of a merger between two independent unions, the Association professionnelle des technologistes médicaux du Québec and the Centrale des professionnelles et professionnels de la santé (six unions were affiliated with the latter).

Following its creation in 2004, the new union was resoundingly successful in winning union allegiance votes, increasing its membership by 60%.

In 2016, another law forced the APTS to campaign again for union allegiance votes. Bill 10 amalgamated over 180 institutions to create integrated health and social services centres and university health and social services centres. When the votes were tallied, the APTS emerged as the largest union representing Class 4 personnel, with 56,000 members.

How does union democracy work at the APTS?

The Convention is the highest APTS decision-making body. It meets every two years. Between conventions, the General Council brings together some 250 delegates several times a year. Active on a day-to-day basis, the Provincial Council consists of 22 people representing the APTS in every region and  the 8 members of the Executive Committee.

The duties and powers of each of these bodies are described in the APTS Constitution.

A monitoring committee, elected by the Convention, makes sure that APTS revenue and expenditures are in keeping with the decisions, policies, and budgets adopted by the General Council.

A number of provincial committees help various sectors carry out their mission. These committees are made up of members of the APTS, the General Council and union staff.

Develops a feminist approach to be incorporated in APTS activities and in our committees and decision-making bodies; raises members’ awareness of issues that particularly affect women. Works with other organizations to develop solidarity around social issues to protect women’s health and rights. Plays a role in developing parental rights and measures to provide family/work/studies balance. Oversees application of the policy against harassment and violence in the workplace, and supports union counsellors on these issues.

Stimulates debate and helps guide APTS actions in keeping with the values identified in the APTS Statement of Principles. Analyzes socio-political issues, emphasizing those that affect professionals and technicians in the health and social services system. Helps develop information materials for elected officers and APTS members in general, and builds solidarity with labour and community organizations engaged in the same social and political struggles. Plays an active role in organizing activities to raise awareness and get people involved, as well as activities to influence political decision-makers.

Provides union counsellors and members of local APTS executives with tools to identify health and safety hazards in the workplace, so they can take preventive action and call on the employer to eliminate these hazards. Tracks the latest news in occupational health and safety and sustainable development, and monitors government and management policies on these matters. Creates ties with a range of organizations to identify, study, prevent and eliminate OHS hazards in various sectors involving APTS members.

Helps develop the social security sector’s action plan and some of its activities; speaks on behalf of members and the sector.

Committee on gender and sexual diversity

Helps APTS members and Quebecers become more aware of the realities experienced by people belonging to sexual and gender minority groups. In APTS activities and decision-making bodies, provides opportunities to think about the experience of LGBT+ people and the issues they face. Analyzes the social issues that affect them and works with other organizations to develop solidarity in defending their rights. Develops and provides access to information materials for elected officers and APTS members in general.

Ensures that the union’s revenue and expenditures are in keeping with decisions, policies and budgets adopted by the General Council.

What kind of activities is the APTS involved in?

APTS employees are assigned to a variety of sectors and departments.

The mission of the feminist action sector is to develop a feminist approach that will be incorporated in APTS activities, committees and decision-making bodies. It also raises members’ awareness of issues that particularly affect women. The sector works with other organizations to develop solidarity around social issues to protect women’s health and rights. It plays a role in developing parental rights and measures to provide family/work/studies balance, and monitors the application of the policy to stop workplace violence.

To fulfil its mission, the sector can count on the involvement of provincial committee members and local feminist action officers. It fosters support among members for issues associated with women’s health and working conditions, and develops and suggests activities at the local level or across Québec.

The socio-political action sector stimulates debate and helps guide APTS actions in keeping with the values identified in the APTS  Constitution and Statement of Principles. It analyzes socio-political issues, emphasizing those that affect professionals and technicians in the health and social services system. The sector helps develop information materials for elected officers and APTS members in general, and builds solidarity with labour and community organizations engaged in the same social and political struggles. It also plays an active role in organizing awareness campaigns and mobilization activities, as well as activities to influence political decision-makers.

The APTS communications and public relations department is responsible for ensuring that information circulates optimally, both internally and externally, and for defining, promoting and safeguarding the APTS public image. Its main objective is to increase APTS visibility and recognition, which necessarily involves developing and consolidating ties with other union and community organizations and the media.

The mission of the union training and education sector is to provide members of local executives, liaison officers, and local delegates with the tools they need to carry out their union duties appropriately. The sector makes sure they are aware of recent developments on issues that concern them and that affect union or professional rights in the health and social services system.

The chief mission of the national bargaining sector is to negotiate and reach an agreement with the government and employer associations on the national provisions of the collective agreement, and to intercede when legal, structural, or organizational changes occur in the health and social services system. This sector is also responsible for representing the APTS in national inter-round forums (where bargaining matters are discussed between formal rounds of contract talks).

Organization of work and professional issues

This sector defends professional issues and promotes the professions of APTS members, with a particular focus on the impact of various ways of organizing work on members’ conditions of practice and work-life conditions.

The sector is responsible for documenting professional issues affecting APTS members and analyzing various aspects of the way their work is organized. This enables it to develop strategies to defend their professional practice, to speak out in the appropriate forums, and to play a strategic and advisory role in defining APTS orientations and policy directions to be put forward across Québec. The sector also provides support for local teams.

The union organizing sector works to ensure that the APTS continues to represent the greatest number of health and social services professionals and technicians. Developing a sense of belonging to the APTS, and supporting a vibrant union life at the local level, are ways of achieving this. The sector’s objective is to encourage the development of the APTS culture and structures in each institution where the APTS is certified. To do so, it supports people who are locally active – union counsellors, provincial representatives, local executive members, local delegates, liaison officers – as they carry out their duties, roles and mandates.

The APTS labour relations department is made up of a large team of experienced professionals, supported by coordinators who ensure that the policy directions and integrated strategies developed for all APTS bargaining units are followed. Whatever the size or location of the bargaining unit, members and local executives are provided with personalized, accessible services that are adapted to members’ specific professional realities.

The sector’s mission is to prevent occupational health and safety problems for professional and technical personnel in the health and social services system. Tools are provided to help union counsellors and local executive members identify workplace hazards so that they can work proactively to demand their elimination.

The mission of the group insurance team within the social security sector is to provide members with a group insurance plan that meets their needs. The sector’s resource persons are also responsible for ensuring the continuity of the insurance plan and contract application, and for dealing with any problem arising from contract application. They provide union counsellors and members with support in insurance cases, particularly those involving disability.

Pensions
Provides members with information about their pension plan (RREGOP). A resource person from the sector also sits on the RREGOP pension committee, which makes recommendations to the negotiating parties and ensures that the pension plan is properly managed.

The APTS Constitution and Statement of Principles