Over the summer, we finally succeeded in getting a settlement for our complaints related to the 2010 pay equity audit. The following FAQs were developed to help you understand the settlement. Don’t hesitate to visit this page again in a few weeks – further questions and answers may be added.

1. Which job titles were covered by the 2010 pay equity maintenance complaints, and what was the outcome?

In Appendix 2 of the agreement, you’ll find the list of job titles for which we withdrew our complaints, and the job titles covered by complaints that were inherited by the APTS after the 2017 union allegiance votes. To consult the agreement, click here.

The APTS filed a number of complaints in 2011 contesting the results of the 2010 pay equity audit.  Some were settled over the years, but when the file was closed in July 2021, some remained unresolved.

The settlement in July covered the overall set of complaints, in some cases acknowledging that changes in our members’ work had occurred, and in other cases withdrawing the complaint. We arrived at this settlement after conducting an evaluation based on criteria set out in the Pay Equity Act and on the information we gathered. In cases where we decided to withdraw the complaint, it was because we didn’t expect to win before the Labour Standards, Pay Equity and Occupational Health and Safety Commission (CNESST).

Through the agreement, the following four job titles received a higher valuation:

3. How is the percentage of the pay adjustment set?

The percentage used to calculate the pay adjustment is based on the difference between the maximum hourly rate on the pay scale for the job title in question (to be adjusted), and the hourly rate for the corresponding ranking on the salary curve for “male” jobs. This difference (in percentage form) determines the pay adjustment that will be applied.

4. What are the pay adjustments set out in the agreement, and at what date do they become effective?

Pay adjustments and the date on which they become effective are indicated in the table below. 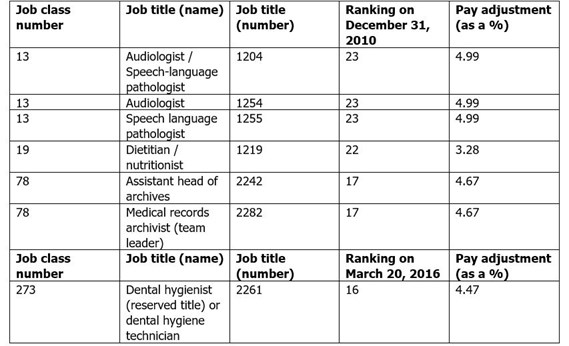 5. Who is entitled to pay adjustments?

Anyone who holds one of the job titles named above (question 4), or held it during the period indicated for that job title is entitled to a pay adjustment.

6. How and when will retroactivity be paid?

There will be one single payment, encompassing all amounts due and including compound interest at the legal rate of 5%. The payment will be made no later than January 29, 2022 (six months after the agreement was signed on July 29). The agreement provides for a longer time-limit in some specific cases.

7. When will my new ranking take effect?

8. Does the agreement include something specific for dietitians / nutritionists?

The agreement says that in addition to a higher ranking retroactive to December 31, 2010, there will be a 2% increase to the pay scale of dietitians / nutritionists retroactive to March 20, 2021.

9. If I’m eligible for a pay adjustment, is there anything I need to do?

If you’re still working for the employer, you don’t have to do anything. Once the calculations have been made, the employer will pay you what you are owed.

However, if you are no longer working for the employer, or if one or both of the following apply:

then you must write to your former employer(s) to request payment.

The agreement says that the employer will attempt to contact each person entitled to a pay adjustment, no later than 90 days after the agreement was signed, at their last known address. The employer’s letter should explain the steps you need to take in order to obtain your pay adjustment.

All employees have three years in which to send their former employer(s) a request for payment of sums owed.

10. Can retroactive amounts be claimed by the heirs of deceased persons?

Heirs may claim retroactive amounts by sending a written request to the former employer(s) of the deceased person.

11. How is retroactivity calculated?

Retroactivity includes the sum of the impact of pay adjustments on your pay scale during the reference period specific to your job title. Annual compound interest at the legal rate of 5% is added to this amount. Retroactivity applies to all of the hours compensated by the employer. Your employer must calculate retroactivity, based on adjustments applicable to the job title covered by the agreement, in proportion to remunerated hours.

12. What deductions apply to retroactivity amounts?

Retroactivity amounts are taxable. All the usual deductions, such as those related to the Québec Pension Plan (QPP), the Québec Parental Insurance Plan (QPIP), the RREGOP, employment insurance, union dues, and taxes, will be calculated for the portion of the cheque related to retroactivity, and applied to this portion.

There will be no deduction from the “interest” portion of the cheque. As for the deduction related to group insurance, it will only apply to types of coverage for which the rate is based on a percentage, i.e., life insurance and long-term disability insurance.

For more information, contact the pay department of the institution that employed you. If you still have questions after that, talk to your local executive and your union counsellor.

13. I think my employer made a mistake in calculating my retroactivity. What should I do?

If you find a mistake or have any doubts, the first thing to do is to ask the pay department of your institution for an explanation. If you’re not satisfied with what they tell you, you should immediately get in touch with your union counsellor. Don’t forget that if you want to contest an amount, you must do so within 60 days of receiving your retroactivity payment.

The employer believed that complaints arising from job titles associated with physiotherapy were different from other complaints. As a consequence, the employer side submitted a proposed settlement for these job titles that was tied to acceptance of the government’s global offer at the bargaining table. More information about the offer in relation to these job titles will be provided at the special general assemblies on the government offer.

15. The CNESST has contacted me to ask if I want to maintain the individual complaint I filed in 2011. What is this about?

Until the law was changed in 2019, if an employer reached an agreement with a union representing a majority of union members in a given job class, this agreement was not deemed to settle individual complaints as well.

At the time, the APTS was the only union in the health system that did not take mandates to represent individual complaints, because our union wanted to let each member decide what action to take with regard to their individual complaint once a settlement was achieved.

The 2019 Pay Equity Act changed the situation. Now, unless the person who filed a complaint explicitly asks that it be maintained, the complaint is deemed to be settled by the agreement between the employer and the union.

This procedure is entirely the CNESST’s responsibility and does not involve the APTS.

16. If I decide to maintain my individual complaint, will I be entitled to the pay adjustments set out in the settlement between the employer and the APTS?

Yes, you will be entitled to these adjustments. If you maintain your invidual complaint despite the settlement achieved by the union, the CNESST will continue to investigate your complaint, and a decision will be handed down at the end of the process.

17. If I decide to maintain my complaint, will I be entitled to support from the APTS?

The settlement we reached was based on our assessment of the cases, and we believe it is the best outcome we could have achieved. In this situation, and in accordance with the agreement between the parties, we will not be able to support members who want to continue their proceedings before the CNESST.

18. I’m currently retired. What should I expect?

Retraite Québec, which manages your pension plan (RREGOP), will pay retroactivity amounts and adjust your pension calculation in order to take into account the adjustments arising from the settlement. The employer will take all the necessary steps required in this regard. The same applies to employees who retire after retroactivity is paid. If this is the case for you, your pension will take into consideration (if applicable) any retroactivity you receive as well as pay equity adjustments effective between the beginning of the reference period and the date of your departure.

19. How is my retroactivity calculated if I receive (or received) short-term disability benefits during the reference period?

Your employer has to recalculate your disability benefits based on the applicable new salary rates, in accordance with Article 30 of the national provisions of the collective agreement.

20. How is my retroactivity calculated if I receive (or received) long-term disability benefits during the reference period?

The employer and insurer have to share information so that the insurer can make the applicable adjustments to long-term disability benefits. Given that the employer has 6 months to pay the retroactive amount, it is better to wait until the employer pays the amounts owing before you contact SSQ Insurance.

21. If I receive (or received) benefits under the Québec Parental Insurance Plan (QPIP), what changes should I expect?

Access your file online and click on the “Declaration of income” tab to make the necessary change. You have to declare this amount as “Other type of income/ Employer” and indicate “pay equity” in “Specify (nature of amount).” This income must be declared for the week in which it was received.

If your file is closed, we suggest that you contact a QPIP client service representative to help you take the necessary steps.

22. If I was on disability leave following a work injury or I received compensation under the SAAQ, what should I expect?

The agreement stipulates that the employer is responsible for all rights and benefits related to remuneration. Our collective agreement stipulates that in the case of employees who’ve sustained a work injury, the employer pays 90% of their net salary (clause 30.21 C), whereas in the case of an injury involving the SAAQ, the employer pays the difference between 85% of their net salary and the compensation payable by the SAAQ (clause 30.21 B). In either case, the amount owed to you will be paid by the employer.