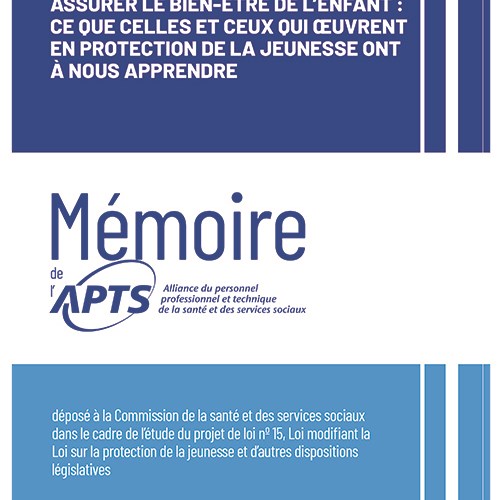 Québec City – A number of suggested changes to the Youth Protection Act are supported by the APTS (Alliance du personnel professionnel et technique de la santé et des services sociaux). The union is concerned, however, that some of the new measures included in Bill 15 (An Act to amend the Youth Protection Act and other legislative provisions) may prove to be inapplicable. Special consultations on the bill are beginning today at the National Assembly.

“We all care deeply about children’s well-being, and Bill 15 enacts many of the recommendactions spelled out in the report of the CSDEPJ – the special commission on children’s rights and youth protection,” says APTS president Robert Comeau. “We welcome this bill, which is a step in the right direction. But we’ve talked to youth workers (whom we represent) and youth protection lawyers, and their response is categorical: unless new resources are allocated and conditions of practice are modified, these amendments to the Act will be ineffectual. Minister Carmant has yet to do the heavy lifting. Once again, I want to tell him that we’re ready to work with him to improve our youth protection system.”

Improving Bill 51 for the children’s sake

A substantial majority of youth workers employed in youth centres are represented by the APTS, which is the only labour organization invited to the parliamentary commission on Bill 51. Provisions to improve the basket of services for children, to ensure that every child appearing in court is systematically represented by a lawyer, and to ensure better sharing of information are welcomed by the APTS. However, other provisions need to be improved, and oversights need to be corrected. For instance, the bill perpetuates the current confusion between ensuring a child’s welfare and keeping the child with their family.

“There are aspects of this bill that could be detrimental to children, and when it was read by APTS members working in youth protection, that’s what elicited the strongest response from them,” says APTS provincial representative Steve Garceau. Mr. Garceau has a master’s degree in psychoeducation and was a youth centre worker for a dozen years. “Provisions that add binding obligations when there’s an emergency, or maintain that children can give evidence regardless of their age, are contrary to the spirit of the bill – and they’ll put a heavier burden on judges, youth workers, and lawyers.”

A key problem: defining the governance of the provincial director of youth protection (DNPJ)

The APTS’s most serious reservation arises from the fact that power is concentrated in the hands of the provincial director of youth protection (DNPJ). In addition, because the DNPJ is also a deputy minister, there is a risk that this person’s independence may be undermined in making the political decisions required by the role.

“The government must clarify the DNPJ’s scope of action. This is crucial if we want to avoid conflicts of competence with professional orders in defining youth workers’ standards of practice,” says Steve Garceau. “The DNPJ’s power to investigate dmust also be defined, and limits must be placed on it in terms of the accountability of people employed in child and youth protection centres.”

A new structure that ignores the expertise of youth workers

The APTS deeply regrets the fact that the bill does not in any way recognize the expert knowledge of professional and technical employees working with young people and their families. These employees are excluded from any consultation or decision-making structure.

“This completely contradicts the recommendactions in the CSDEPJ report,” says Robert Comeau. “The Commission argued for recognition of the vital role played by youth workers in organizing and delivering youth protection services. Bill 15 establishes a new hierarchy in which orders come from above, while news of reality as experienced on the ground never reaches the DNPJ. The minister needs to create a management structure that includes representatives of youth workers employed in youth centres, to be chosen by their peers, if this reform of the Youth Protection Act is really going to follow the Commission’s recommendactions.”

Read the APTS brief (in French)