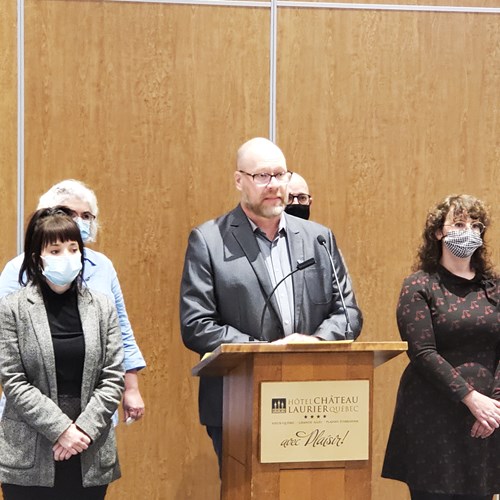 Québec City – The APTS (Alliance du personnel professionnel et technique de la santé et des services sociaux) is profoundly dismayed to see the Legault government still refusing to acknowledge the magnitude of the labour shortage affecting the entire health and social services system. While waiting for an emergency meeting with premier François Legault and Treasury Board president Sonia LeBel, the APTS is suspending the process of consulting its members about the renewal of their collective agreement.

“We’re requesting this last chance meeting to find a way for all APTS members to achieve working conditions that will attract employees to the public system and keep them in it,” declared APTS interim president Robert Comeau at a press conference. “The Treasury Board Secretariat told us repeatedly at the bargaining table that it had reached its limit and could not offer more. However, our delegates refused to view the government offer as an agreement in principle. And yesterday’s announcement for nurses confirms that the government does in fact have the leeway to improve attraction and retention of personnel in the public sector. That’s why we’re asking the government to review its offer, and to show its good faith by going to the root of the problem.”

The measures announced yesterday are aimed at one class of personnel only. Nothing has been done to reduce work overload in labs, medical imaging and nuclear medicine rooms, youth centres, home care, mental health services, or other crucially important sectors where waiting lists keep getting longer. Needless to say, the government’s announcement was met with anger and indignation on the part of the union’s 60,000 members.

“When premier Legault and health and social services minister Christian Dubé finally understand that the system isn’t exclusively made up of nurses, beneficiary attendants and doctors, that’s when we’ll finally be able to change the management model and attract and retain more employees,” says Comeau. “We need an overall vision if we want to reduce the work overload leading hundreds of employees to leave the public system, or the waiting lists preventing Quebecers from accessing the services they require. Doctors and nurses can’t analyze a blood sample, carry out an MRI scan, make sure youth protection measures are applied, adjust a prosthesis – I could go on and on. Those are things that are done by professionals and technicians in the health and social services system.”

Since the beginning of the pandemic, the Legault government’s blinders have created an unhealthy division between professions, preventing the mobilization required to rebuild a safe, accessible, high-quality public system. The policy of sowing division, which the government has been applying since the beginning, has at least one obvious effect: it produces even greater alienation and loss of motivation among public-sector employees.

“Once again, the Legault government is showing its lack of respect for thousands of health and social services employees,” concludes the APTS president. “In deliberately excluding these employees from the measures of attraction and retention they also need, the government is basically pointing them towards the private sector. There will a price to pay for the government’s incoherence and lack of vision – and in the end, Quebecers are the ones who will be asked to pay it.”