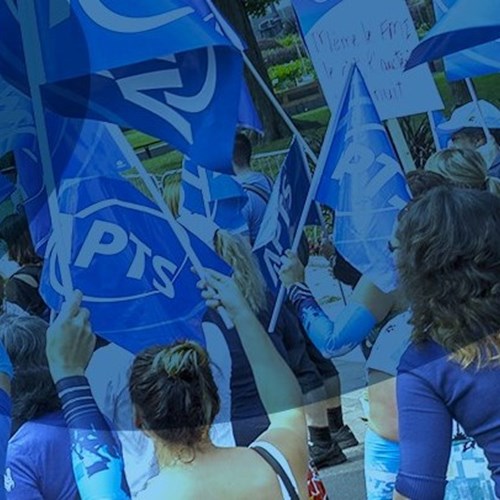 Gaspé – The Alliance du personnel professionnel et technique de la santé et des services sociaux (APTS) held a press conference this morning with the MNA for the Gaspé, Méganne Perry-Mélançon, where various union representatives and members decried the situation facing medical technologists in the Gaspé, particularly those working in the laboratories at the Hôpital de Gaspé.

“The situation is serious. In fact, it’s untenable. Our teams are at the end of their rope. It’s not complicated – our members have no one to replace them! Forced overtime and understaffing are pushing them to the point of exhaustion. There are only six medical technologists left out of 14. All the others are off work. For months now, we’ve been worried about surgeries or other services being suspended if we’re no longer able to provide biomedical tests,” declared Jenny Tardif, APTS provincial representative for the Gaspésie et les Îles-de-la-Madeleine.

Five years ago, the government decided to centralize lab tests in certain institutions as part of the OPTILAB reorganization process. Following this initiative, many medical technologists were told that the “worthwhile” lab tests would be done in other regions. Some of our members decided to go and work elsewhere, or to change professions.

Despite the growing needs, there are no new recruits to take their place, and members of the team are buckling under the pressure of overwork. Today it’s the town of Gaspé that finds itself in an unacceptable situation. What will be the next town affected? Maria? Chandler? Sainte-Anne-des-Monts?

Given the critical situation in which its members find themselves, the APTS had a duty to make their demands heard at the highest levels of government.

“This morning, we called on the Minister of Health and Social Services, Christian Dubé. We want to make sure that the message gets through to him. It's time for the government to take off its blinders. What was announced to medical technologists and medical laboratory technicians who graduated in 2016 has discouraged the next generation and devalued our profession. If the government is really looking for long-lasting solutions to make this a rewarding career, the first step is to guarantee that all the lab tests currently done in the Gaspé remain there, and that the region's laboratories be added to the various scholarship programs currently offered in other regions,” declared APTS Vice-President Sandra Etienne, who holds a diploma in biomedical laboratory technology herself.

The APTS wants Quebecers to know that employees who have a diploma in biomedical laboratory technology perform a myriad of duties to diagnose diseases and ensure adequate patient follow-up and treatment. Their responsibilities include taking samples, preparing them for testing, and analysing them. As experts in their field, they ensure the precision and accuracy of the test results, so that doctors can make the right diagnosis. In short, they are indispensable in the public health and social services system.

Méganne Perry-Mélançon, who was on hand to support these members of the APTS, stressed similar points as she addressed the Minister of Health and Social Services. “I am calling on Minister Christian Dubé to take immediate, concrete steps to overcome the serious labour shortage affecting medical laboratories in the Gaspé. An urgent review of the OPTILAB project is needed if the government hopes to reverse the trend. The employees and population of the Gaspé deserve better,” concluded the MNA for the Gaspé (Parti Québécois).