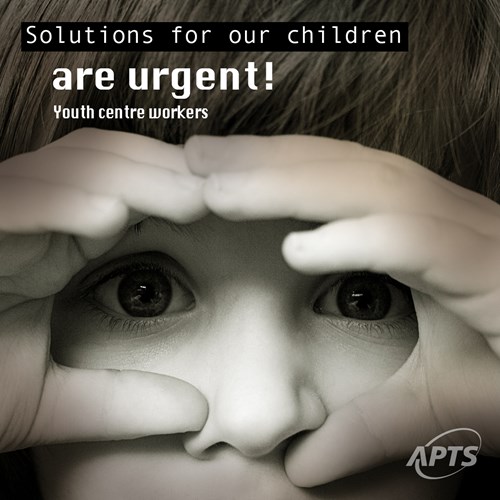 The documentary series Au cœur de la DPJ, dealing with Québec’s youth protection system, is coming to an end tonight on the RDI channel. The APTS (Alliance du personnel professionnel et technique de la santé et des services sociaux) would like to highlight a crucial aspect of youth workers’ job, which the series unfortunately could not address – the huge number of cases they deal with, and the work overload this entails.

“The series showed exactly how much time and emotional energy the youth worker had to give just to support a single family,” noted Benoit Audet, 3rd APTS vice-president. “What it didn’t show was that each youth worker is responsible for dozens of cases and has to put the same amount of energy into each one of them simultaneously. There’s constant pressure to just take one more case because the system is flooded. And then there’s having to set cases aside to carry out an emergency intervention.”

The APTS, which represents over 10,000 youth protection workers, is well aware of the constraints arising from the confidentiality of youth protection cases, the need for authorizations to treat the issue, and the angle chosen by those responsible for the series. However, it is nonetheless convinced that there is something the series should have shown: part of the crisis currently affecting Québec’s youth protection system derives from problems in attracting and retaining personnel. Minister Lionel Carmant himself, in an interview in which he discussed the appointment of a provincial youth protection director, acknowledged that youth protection services are currently suffering from the exodus of youth workers.

“Right now, what Minister Carmant needs to do is to put pressure on Sonia Lebel, his colleague at the Treasury Board Secretariat, to improve the working conditions of youth protection workers in youth centres,” says Audet. “It makes no sense that after 16 months of contract talks, the government still hasn’t come up with concrete, long-lasting solutions to help attract and retain these employees, whose level of expertise needs to be recognized.”

The APTS applauds the youth protection workers featured in the series. These are workers who agreed to publicly share their actions, their clinical judgment, and their doubts and emotions so that people might gain a better understanding of a job to which they are passionately committed.

“On behalf of the APTS and in my own name, I want to thank and congratulate the people who’ve helped showcase the value of the crucial work done by these professionals and technicians,” says Audet. “Every day, they’re working to protect our most precious asset: our children. It’s not easy to expose yourself to the camera and make yourself vulnerable to criticism. They carried it off in style, and we want to say how much we admire them.”