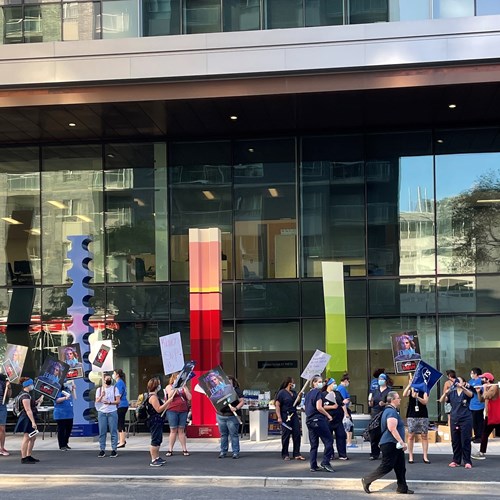 Montréal – A two-day general strike is being launched by 60,000 members of the APTS (Alliance du personnel professionnel et technique de la santé et des services sociaux) at a time when contract talks for the renewal of their collective agreement are completely stalled after 18 months’ work. Employed in youth protection, medical archives, or services involving mental health, rehabilitation, medical imaging, intellectual disabilities or autism spectre disorder, an overwhelming majority of professionals and technicians working in the public health and social services system are walking out this Monday to protect the accessibility and quality of services provided to Quebecers.

“Even if you hand out millions of dollars to create new jobs, that won’t make any difference unless there are people who are willing and trained to do the work,” says APTS 1st vice-president Robert Comeau. “Vacant positions are becoming more and more common. There’s been no breakthrough in negotiations over the past month even in youth protection, which the government claims is a priority. The government is shooting itself in the foot by refusing to improve working conditions for employees in the public system.”

The APTS is highly critical of the government’s uncommitted stance. In the spring of 2020, as the pandemic raged, the government asked labour organizations for a quick bargaining process. Since then, talks have languished and government negotiators still don’t have a mandate to reach a negotiated settlement. The comprehensive offers they’ve tabled on three occasions are virtually identical and barely cover inflation. This shows how little true concern the CAQ government has for the working conditions of the men and women – mainly women – who take care of Quebecers’ physical and mental health.

These will be the first days of strike action under the current round of bargaining talks in the health and social services system. Essential services will be maintained throughout. The strike represents a passionate appeal from employees who have been working with utter dedication and professionalism to take care of Quebecers, day in and day out, despite the pandemic. Their need for support and recognition is acute.

“The government is trying to put out random fires by offering to improve working conditions for only a few job categories,” says Comeau. “Meanwhile, the whole system threatens to go up in flames. Work overload is becoming generalized in every sector. Management of public services hurtles from one crisis to the next. This has got to stop! We need to highlight the value of public sector jobs, attract new employees, and retain the expert knowledge of those who are already there. They deserve to be genuinely recognized by the Québec government, and not just to be thanked in passing at a press conference. We’re done being paid a woman’s wage.”

Québec must provide the resources to live up to its ambitions

Quebecers expect accessible, high-quality services, but the Legault government is not providing the resources needed to achieve this goal. There are solutions that would halt the exodus of youth protection workers as well as psychologists and lawyers working for the public system – to name just a few categories of workers for whom it is obvious that action is urgently required. The government’s hardline approach is particularly worrisome at a time when multiple job postings are appearing to recruit workers from outside the system, and CISSSs and CIUSSSs are forbidden to fill positions in social services because that might aggravate current problems in youth protection where workers are leaving in droves.

“This is François Legault’s opportunity,” concludes the APTS vice-president. “It’s time for him to demonstrate that he really believes all Quebecers are entitled to accessible, high-quality health care and social services. One thing we can tell him for sure is that APTS professionals and technicians do care deeply about these services – and they’re willing to fight for them.”