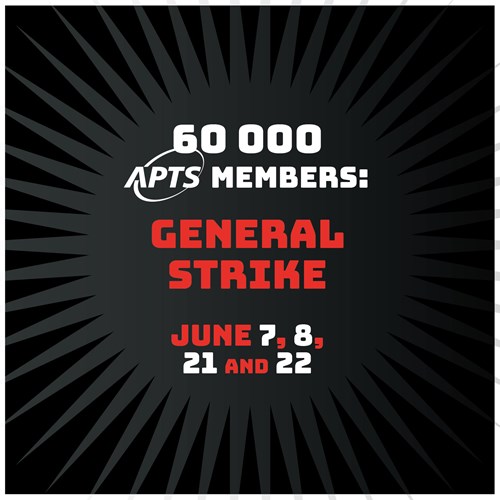 Québec City – Contract talks started over a year and a half ago; the government is refusing to take measures that would effectively address problems of work overload and employee attraction and retention in Québec’s health and social services system; and a worldwide health crisis has highlighted that system’s deep fault lines. Given this context, the APTS (Alliance du personnel professionnel et technique de la santé et des services sociaux) has no choice but to use the strike mandate obtained from its 60,000 members. The strike will take place on June 7, 8, 21 and 22 in all of the institutions where the APTS represents employees, unless the government responds favourably to its demands to reach a satisfactory agreement.

“The decision to announce four general strike days was not taken lightly,” said APTS vice-president Benoit Audet after delegates had voted at the APTS General Council. “We’re forced to take this action because we need to make the Legault government see reason. Right now, it’s stubbornly refusing to acknowledge the problems experienced by professionals and technicians in the health and social services system. We’re not striking just to get decent working conditions and recognition of our members’ expertise – we’re defending quality public services for all Quebecers. We too have been very patient. Premier Legault and the Treasury Board president are responsible for the deterioration of the work climate in our institutions.”

The APTS regrets that the intensified negotiations announced by Premier Legault with great fanfare on May 2 have yet to take concrete form. There has been no move from the government at the bargaining table to show that it genuinely wants to reach an agreement in the near future.

“We’re saying this again: we want to reach an agreement quickly,” said Benoit Audet. “That implies that the government will significantly improve its offers so that concrete steps can be taken to address challenges in the health and social services system. We need to solve the problem of work overload and make it easier to attract and retain personnel, and improving our members’ pay and working conditions is the only way to do that. The ball is in the government’s court if it wants to avoid a strike.”

With the government’s announcement of a highly questionable project to build a “third link” tunnel – guaranteed to cost $10 billion – in the Québec City area, Premier Legault’s spurious claim that the government doesn’t have any money no longer holds up. The government must invest in the indispensable workers who are calling on every last ounce of their strength to hold the system together.

“Once again, the government is confirming that predominantly male sectors are its one and only priority, and that health and social services are still seen as an expenditure without any economic benefit – even though this is contradicted by every study,” said Audet. “And once again, women will be paying the price in disproportionate numbers. How can the government justify the fact that current offers maintain a pay gap that has been growing for years in relation to other economic sectors? Why has it decided to give the private sector juicy contracts with health and social services institutions? There is a solution, and it’s actually a simple one. Workers are the heart and soul of the public system, and to rebuild this system, the government has to stop paying them a woman’s wage.”

Something is rotten in the state of the CAQ government

The APTS responded with indignation to comments made the day before yesterday by health and social services minister Christian Dubé when announcing the plan to ease COVID restrictions. Although the minister has backpedalled since then, the very suggestion that the Legault government might think of using the health emergency to get the flexibility it needs to restrict workers’ rights through ministerial decrees simply indicates how low it will stoop in order to achieve its ends and prevent any genuine negotiation.

“Minister Dubé’s remarks are a matter of very serious concern,” concluded Benoit Audet. “He backtracked yesterday, but we got a clear view of the government’s will to use every possible means to break the rules of these contract talks. Premier Legault must clearly establish that the health emergency will be maintained only on the basis of the pandemic’s evolution in epidemiological terms – and that it has nothing to do with public sector negotiations. If he doesn’t, his government’s bad faith at the bargaining table will be established beyond the shadow of a doubt.”