2022 Québec budget: Half measures to attract and retain personnel 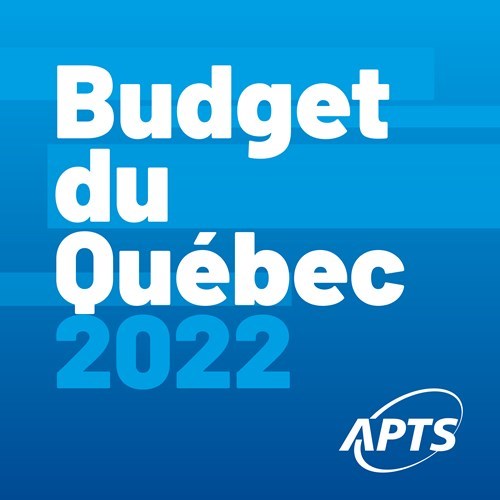 Québec City - While recognizing that the Legault government has reinvested in public services, the APTS (Alliance du personnel professionnel et technique de la santé et des services sociaux) deplores the fact that finance minister Éric Girard’s budget does not include measures to help attract and retain personnel in a system that has been made extremely fragile by the pandemic. “It seems that the minister didn’t get the memo about the labour shortage affecting our society and especially our health and social services system,” says APTS president Robert Comeau.

“We can’t rely on the private sector alone to paper over the cracks made apparent by the pandemic. Minister Girard’s budget seems to recognize that if we want to consolidate the system, we need to treat employees well and let them know they’re valued. He admits that investing in employees, including technicians and professionals, and acknowledging the value of their expert knowledge, is key to providing Quebecers with quality care and services. But unfortunately, the Legault government’s fourth budget doesn’t go beyond words. Once again, it misses the target: there’s not a single new measure to attract or retain employees.”

As inflation reaches levels not seen in forty years, the value of the pay increases granted in the last collective agreement is melting like snow in the sun. At a time when the unemployment rate is extremely low (despite the crisis), the Legault government needs to strengthen the public system – the only one that can provide a guarantee of universal access – and reduce waiting lists that are getting longer and longer in every sector.

“During the pandemic, placement agencies have been draining the lifeblood from the health and social services system by offering better working conditions and salaries,” says APTS 2nd vice-president Émilie Charbonneau. “It’s a zero-sum game. The government turns to the private sector, and the private sector then takes resources from the public system. Quebecers’ taxes will provide the money to ensure the private sector is handsomely paid – and yet, Quebecers could get the same services from the public system, without having to enrich a small elite that will be laughing all the way to the bank.”

Can we stop playing in the same bad movie?
The APTS is also sorry that the finance minister did not take advantage of this budget to finally deal with the underfunding that is a legacy of past austerity. To avoid future wrong turns and cycles of budget cuts, the APTS has made a suggestion to the government: why not create a budgetary shield to protect health and social services funding? “We’re willing to reduce the government’s leeway in order to balance the budget and diminish our public debt,” says Charbonneau. “Why can’t we apply similar legal restrictions to the funding of health care and social services? Here we are again, heading for another reform without any guarantee in terms of future funding. There’s a feeling of déjà vu that’s pretty painful for employees.”

If a budgetary shield were in place, an extra $1.5 billion would be available today to give Quebecers better services. Health and social services minister Christian Dubé has been talking about a “refondation” of the health and social services system, meaning a plan to change it in fundamental ways. He would sound more credible if he decided to adopt a planning tool that would ensure stability and continuity of funding.

New beginning or privatization?
There is no budgetary shield, but meanwhile the stage has been set for the system’s “refondation”. Unfortunately, this new reform is off to a bad start. Nor does it seem to be based on any kind of public consultation – a process that might have helped us avoid the errors of the Barrette reform.

“Once again, a government is going to attempt to reform the health and social services system without consulting its workers. Once again, Quebecers’ needs won’t be taken into account,” says Comeau. “Once again, a managerial vision, derived from private companies, will be used in an attempt to measure our members’ performance as they provide care and services. The health and social services system is not a pulp and paper mill. We treat, support and care for human beings, some of whom are profoundly vulnerable. If Minister Dubé really wants to improve the system, he needs to listen to people on the ground and work with them. Once again, I’m holding my hand out to him.”