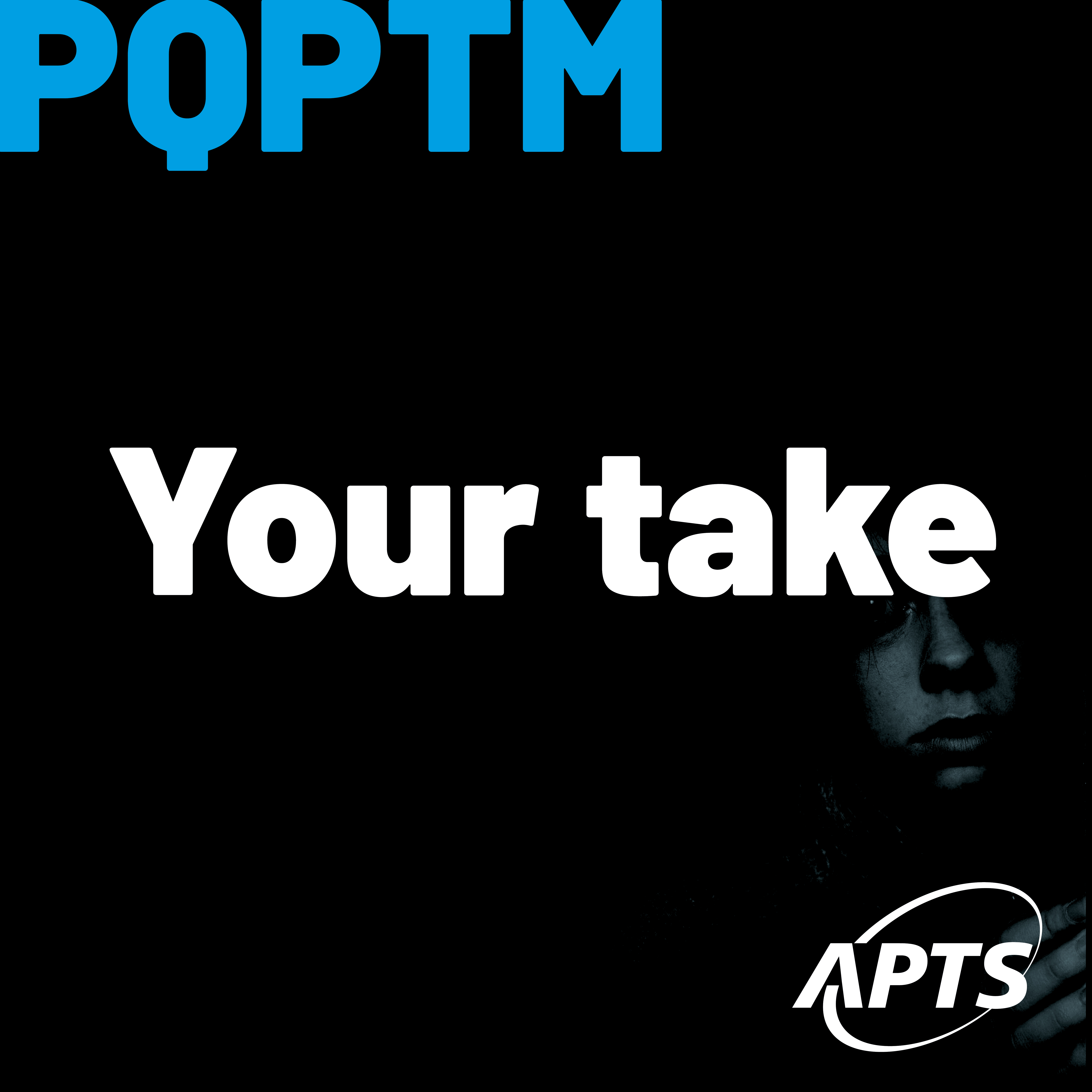 The Québec Program for Mental Disorders (Programme québécois pour les troubles mentaux - PQPTM) was introduced in 2018 with the aim of improving access to psychotherapy. The PQPTM is a standardized stepped-care model of care, ranging in the intensity of treatment from self-care, continuous monitoring and support groups to psychotherapy. The program is being implemented gradually and the government plans to roll it out to all institutions in the health and social services sector. However, questions are being raised about its effectiveness and its limitations. A survey of 3,000 APTS members practising in the field of mental health (more than 700 of whom are already working with the PQPTM) suggests that the program is actually likely to be detrimental to the treatment of various mental health disorders.

Highlights of the APTS survey 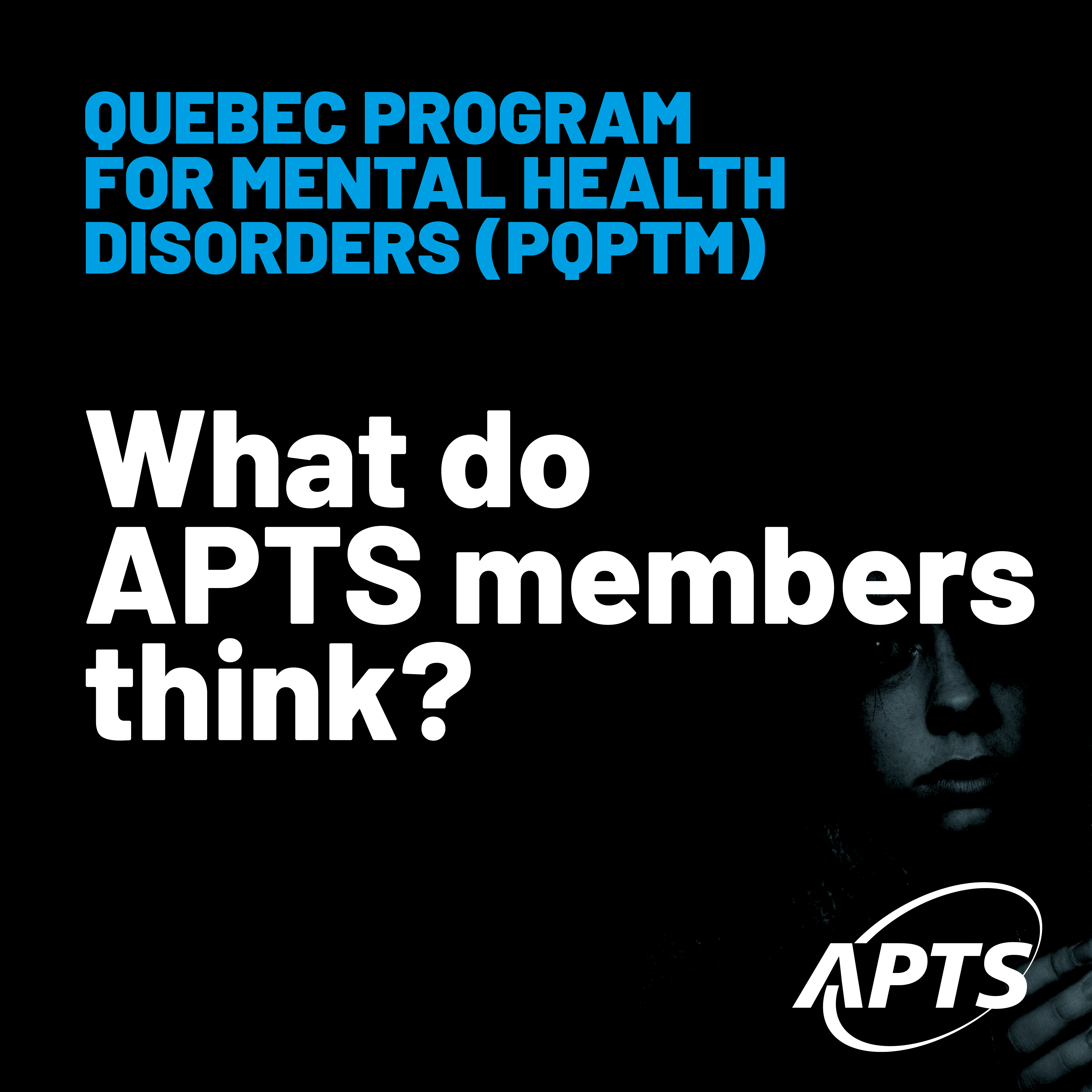 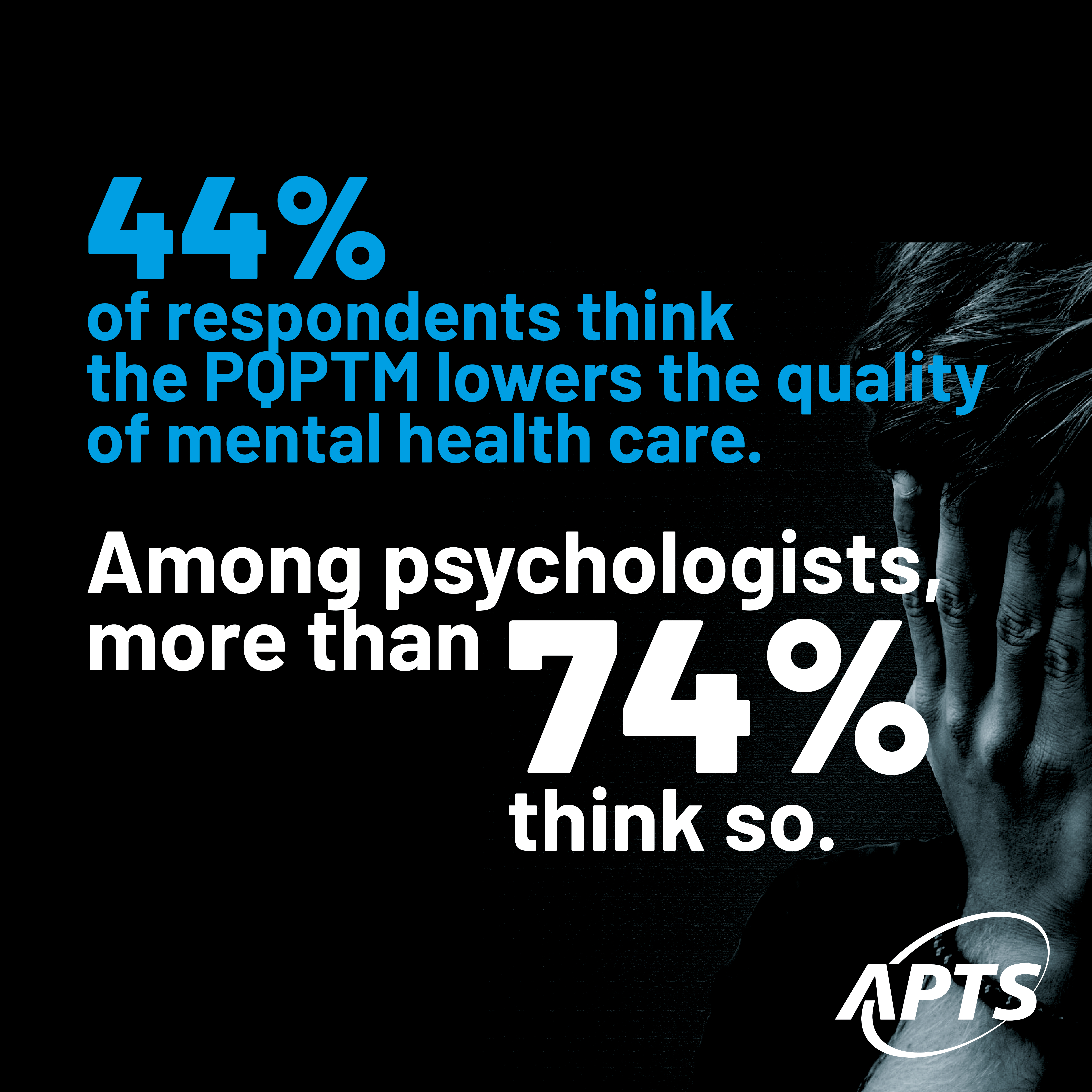 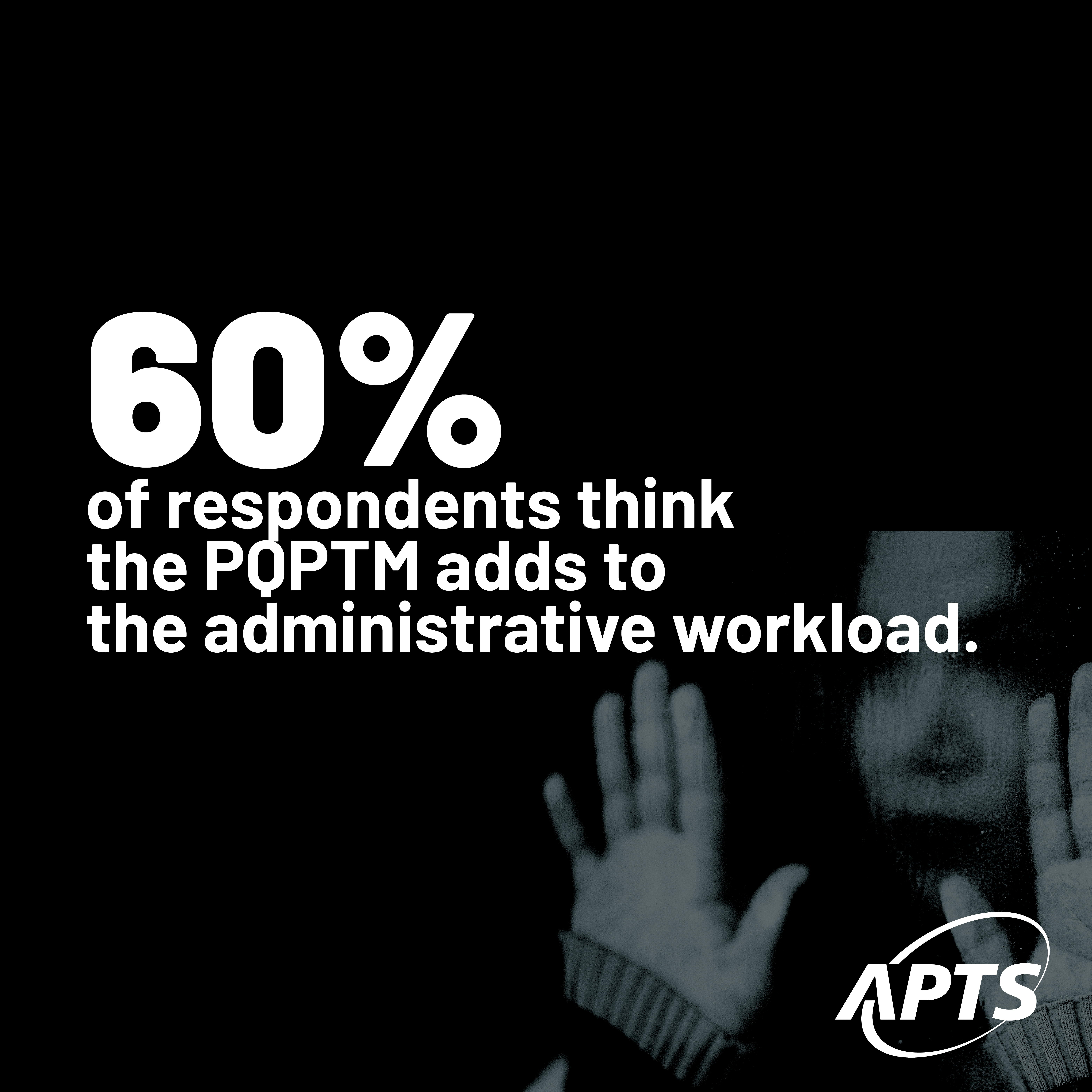 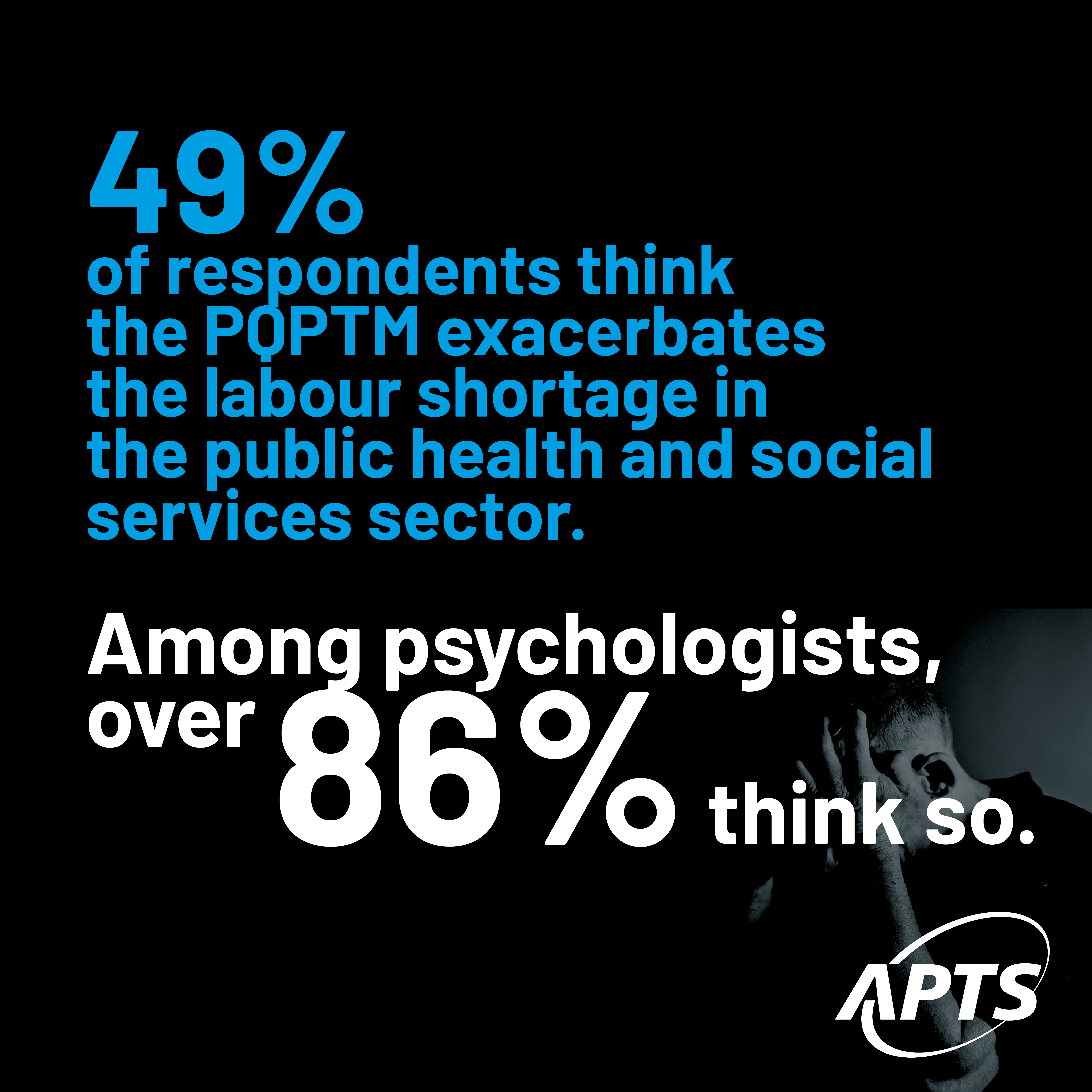 The PQPTM is an offshoot of IAPT (Improving Access to Psychological Therapies), a similar program implemented in England that has not won anything near unanimous approval. It has been criticized for failing to provide adequate treatment for people in need, in addition to raising costs and giving rise to a higher rate of burn-out due to the greater volume of treatment. It is also charged with generating a high drop-out rate among clients.

RISKS TO THE CLIENT

Treatment begins by assessing the client’s symptoms. Under the PQPTM model, this must be done using a decision-making support tool or software. So, depending on the presenting symptoms and the selected decision-making algorithm, the client will probably be directed to the first stage of the PQPTM, in low-intensity treatment.

Dismissing symptoms of a mental disorder

The PQPTM is essentially focused on symptoms of anxiety or depressive disorders, obsessive-compulsive disorder and post-traumatic stress. Surprisingly, concurrent disorders (mental health and addiction) and comorbidities are not taken into consideration. Moreover, while most people undergoing psychotherapy in the public health sector present with chronic disorders, the PQPTM appears to target one-time or temporary disorders. Chronic problems require more time, flexibility and higher intensity treatment. The PQPTM is not designed for this purpose as it favours a brief approach to therapy for a fixed term, limited to 10-15 sessions.

The above-mentioned issues accentuate the risk of an inappropriate pathway of care. For example, a poor assessment represents a real danger insofar as it can conceal the complexity of a case. This in turn can lead to inadequate provision of care and services with potentially grave consequences, including mismanagement of the client, the risk of their being removed from the waiting list for psychotherapy, the deterioration of their mental state and the revolving door phenomenon. In the UK, the government itself concluded that 50 percent of the clients treated through IAPT did not show any improvement, whereas other studies showed a recovery rate of between 10 and 22 percent.

RISKS TO THE PRACTITIONER

What is described above is in flagrant contradiction with the ethical duties of psychologists and licensed psychotherapists. For example, the cognitive-behavioural therapy is one approach among many, but it is the only one permitted under the PQPTM. Some professionals do not have the requisite training to employ this approach and to adopt it anyway would be a violation of their code of ethics.

A threat to professional autonomy and judgment

The program’s many limitations jeopardize practitioners’ ability to exercise their clinical judgment and negate their professional autonomy. There are also concerns that the process of assessment and referral to the Adult Mental Health Access Desk is marred by obliging practitioners to go the low-intensity route, thus excluding psychotherapy from the treatment plan. This clearly points to the devaluing of professionals.

The spectre of overload and a deteriorating work climate

British psychologists have apparently been traumatized by the introduction of IAPT; according to their reports, the program has wrought major changes that have taken a toll on the quality of mental health services. Moreover, a 2017 study study found that IAPT practitioners had a burn-out rate of 50 to 68 percent due to mechanistic work processes and the pressure to handle as many cases as possible.

This pressure also corroded the work climate by reducing the level of cooperation between professionals. We know that clinical support, discussion among professionals, and having a variety of tasks are all conducive to a healthy work climate. According to the study, however, these positive aspects of work life became increasingly rare in the organization providing mental health care services.

APTS has your back!

Do you provide mental health services? Is the PQPTM being introduced in your institution or has it already been implemented? If you feel that the implementation of the program is undermining your professional autonomy, your local team can support you to ensure that the way work is organized is consistent with your ethical obligations.