Minimum wage increase to $15.25 an hour | Too little too late, says coalition for $18 minimum wage 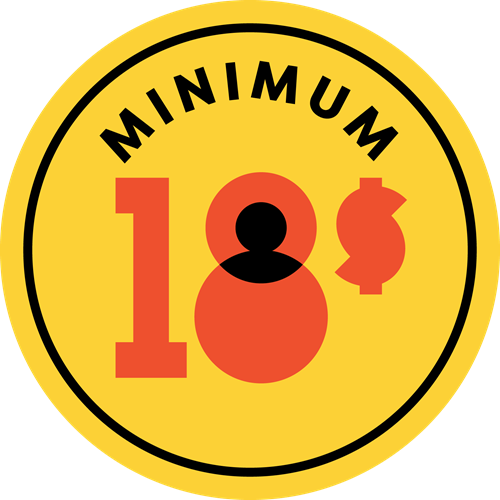 Montréal – The “Minimum 18$” coalition expressed frustration and disappointment with the Québec government’s time lag in raising the minimum wage to $15.25 an hour.

“If Labour minister Jean Boulet’s announcement hadn’t come six years too late, and inflation hadn’t been hovering at almost 7% for the past year, the minimum wage increase to $15.25 an hour would have been good news. But in the current context, raising minimum wage by a dollar is a show of contempt for the reality of workers’ lives. François Legault’s government is making the most poorly paid workers even worse off,” said the Coalition’s spokesperson. The Coalition consists of the FTQ, CSN, CSQ, CSD, APTS, SFPQ and SPGQ unions, as well as the Collectif pour un Québec sans pauvreté (an anti-poverty group), the Front de défense des non-syndiqué-es (an advocacy group for non-unionized workers), and the Immigrant Workers’ Centre (IWC-CTI).

Out of touch with reality

“In December, Premier François Legault admitted that it’s hard to live decently on $18 an hour. Yet his government is proposing a $15.25 minimum wage. It’s appalling,” said the Coalition’s representatives. Coalition members wonder how the government can claim to want to fight poverty while setting the minimum wage so low that people can barely get by.

“With low-income workers particularly hard hit by the rising cost of housing, transportation and groceries, this paltry increase in minimum wage seems to us to be completely out of touch with reality,” added members of the “Minimum 18$” coalition. “We shouldn’t have to remind Minister Boulet that according to Québec food banks’ HungerCount, the number of food-bank users whose main source of income is employment has increased by 37% since 2019!” Even before the surge in inflation, the Coalition's analyses showed that the minimum wage would have to go up to $18 an hour in order for a single person working full time to escape poverty.

With Quebecers earning on average $31.41 an hour in December 2022 and Statistics Canada reporting that the average wage had increased by 6.9% in the past year, there’s every  indication that the average hourly rate will exceed $32 in May 2023. “For years, we’ve criticized the government’s  policy of capping minimum wage at 50% of Quebecers’ average wage. But this year, to add insult to injury, the Québec government has set the minimum wage well below that threshold, at 47%. Using its own criteria, the government should have at least raised the minimum wage to $16 an hour,” explained members of the “Minimum 18$” coalition.

Time for employers to assume their responsibilities

Given the current labour shortage, which is even more acute in food services, accommodation and trade, the government can’t even trot out its usual excuse that a minimum wage hike would mean job losses. “A number of employers have already decided to offer better pay than their competitors in order to attract and retain workers. Now is a good time for the government to require all employers to adjust their employees’ pay, so workers can make a decent living,” said the Coalition’s spokespersons.

Wages high enough to lift workers out of poverty

The Coalition’s objective of raising minimum wage to $18 an hour will soon have to be adjusted to reflect cost-of-living increases, which have been particularly marked in the past year. In setting their target, members of the Coalition take various low-income indicators into account. These indicators include the Low-Income Measure (LIM-60), set at less than 60% of the median income, and livable income as determined by the Institut de recherche et d’informations socioéconomiques (IRIS, a socio-economic research institute).

"The promise of full-time work should be more than a mere survival plan. Raising the minimum wage should offer a way out of poverty. It should give workers choices as consumers, enable them to deal with unforeseen circumstances, and allow them to take part in social and cultural activities. That’s clearly not possible at $15.25 an hour. Even an $18 minimum wage would barely allow workers to live a decent life,” concluded the members of the “Minimum 18$” coalition.